The word pumpkin originates from the word pepon (πέπων), which is Greek for “large melon”. The French adapted this word to pompon, which the British changed to pumpion and later American colonists changed that to the word we use today, “pumpkin”. They are believed to have originated in North America.  They are a fruit, and the oldest evidence, pumpkin-related seeds, found in Mexico, date between 7000 and 5500 BCE.

Pumpkins are hermaphrodites (monoecious)!  They have both male and female flowers on the same plant.

Gnocchi are Italian potato dumplings, most likely of middle eastern origin, that have been in existence since at least the Roman times. The Roman legions introduced them during the enormous expansion of the empire into the countries of the European continent.

Some of my fondest memories of childhood come from sitting on my grandmother’s counter while she hand made gnocchi with a huge kettle of homemade red sauce bubbling on the stove top.  Gnocchi are a delicious comfort food, the recipe below a little more elegant and modern with the American infusion of pumpkin for this time of year.

In a large bowl, mash or rice the potatoes and allow them to cool. With a fork, gently mix in the remaining ingredients except flour, 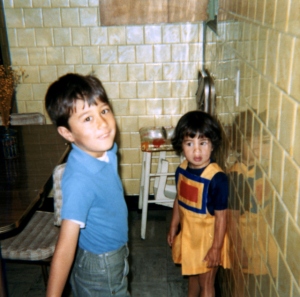 butter and sage. Add flour a little at a time until you have a smooth, sticky dough. Briefly knead the dough in the bowl just until the last bits of flour have been incorporated.

Bring a large pot of salted water to a rolling boil while you divide the dough into 6 pieces. On a floured surface, roll each piece into a long rope, one-half inch in diameter. Cut the rope into half-inch pieces. Roll each piece of gnocchi down the back of the tines of a floured fork to make sauce-holding shallow grooves. Set the pumpkin gnocchi on a floured baking sheet. Repeat the process with the remaining dough. Immediately begin boiling small batches of gnocchi. They should rise to the surface after a couple of minutes. Once they rise, boil for 2 to 3 minutes more. Test a piece from the first batch to make sure it is cooked through and not gummy, and adjust cooking time accordingly. Remove the pieces with a slotted spoon and add them to a lightly buttered bowl. Keep covered.

Meanwhile, heat a skillet to medium-high and add the butter. Let it cook without stirring until the edges begin to brown. Stir in the sage and cook for 30 seconds to 1 minute. Season with salt and pepper. Pour the butter over the gnocchi and stir to coat. Ladle into bowls. Serves 6 to 8.