I don’t know where to begin our story.  It’s hard to tell, full of private details that I would prefer to keep to myself.  But I cannot talk about this without being honest and keeping you secret is so much work.

Three weeks before, I had a dream that I got a phone call telling me that you died.  It was so real to me that I checked public death records for you the following day.  When I finally picked up my voice mail messages on September 26th and I heard for the first time the two messages left by a nurse on September 10th telling me that you were in failing health, I was very worried, or maybe apprehensive is a better word.  Of course I did not want you to be sick.  But if I am honest, my first concern was that you would want to come stay with me, and I was afraid about that.

You’ve done such horrible things.  Your temper is tattooed into my mind’s eye.  It has changed who I am.  I have had nightmares my entire life.   I remember one night in Campbell when you had flown into a rage against our mum.  Mark and I were huddled up in your bedroom meticulously unwrapping and destroying a whole carton of your Pall Mall cigarettes.  I am not sure if we intended to punish you or if we were just so frightened that we had to destroy something.  You have been present in every bad partner I have chosen, every dangerous decision I’ve ever made, every scandalous act I’ve ever committed, every moment of self loathing, and all of my “proximity” issues.

I think part of my love for animals is hard wired into my DNA.  You and Mum both always told me that when I was two years old,

someone asked me what I wanted to be when I grew up, and I replied, “A horse.”  My favorite way to ride in our old Dodge Dart was with the window open, my head hanging out, and panting like  a dog.  I hated dolls and spent my childhood galloping around the neighborhood, snorting and whinnying.  But part of it, too, was that you helped teach me to prefer the honest and uncomplicated company of animals over that of humans, and with only a handful of exceptions, I am still like that today.

I’ve said and written so often that we are defined by the choices we make, that our priorities determine our character.  I’ve said that at journey’s end, it is all that we are.  I am struggling with this because you made so many bad choices.  You paid for those choices with everything that ever meant anything to you.  You did not have a good life.  I can’t believe, I don’t believe, that at the end, it is all that you were.  There was another side to you, too, and I remember that side better.

Our cousin, Lyda, wrote to me the day that you died, and she said, “I remember how much he doted on his little girl!  You are always so brave and strong, you will use that to go through these sad places.”  It’s true that you made me resilient.  I will never say that your temper was a blessing, but as a result of it, I have never backed away from anything in my life. I face my fears head on.  I will ride into any storm without hesitation.

And you doted on me. You really did.  I cannot remember you ever telling me no to anything, ever in my life.  You spoiled me terribly.  Never once, not once, did you ever lose your temper with me.  That must have been hard.  I make everybody mad, but not you.

I remember when I was very small that you took me to a bird sanctuary and a little duckling swam up to me and I picked it up.  When I asked you if we could keep him, you put him in your pocket and we went home with our stolen duckling.  That was Huey.  He ended up being a girl.  I remember all the hours you slept in the car at Half Moon Bay waiting for me while I went horseback riding on the beach. I loved going fishing with you.  On boats and on piers, getting up at the crack of dawn.  You used to buy that weird bait. I think it was fish eggs of some kind dyed fluorescent pink or yellow.  Sometimes we caught nothing and we would buy fresh fish from a local fisherman and come back and tell Boo Boo that we “got” them (always careful to avoid the distinction between “bought” and “caught”).  And my first day at Montessori, I kicked Mrs. Delanerol and ran out of the building after you. I ran to you and not my mother.

I am having a really hard time with your death.  Everything was so complicated.  Neither Mark nor I had seen you or spoken to you

since 1989.  I had written some letters, sent some cards and some photos.  I am sad.  I have regrets.

I talked to Mark for a long time on the phone the other night.  He is trying to help me.  Mark said that your last act was one of tremendous will, courage and strength and it has changed our lives again.  He said that you gave us a gift that I must now accept.  Mark told me that the end was not a random act.  It was your plan.  We know that you had given up a long time ago, at least months ago.  You wanted to die.  You said it.   “I am waiting to die now. I never thought I would live this long.”  But in spite of the discomfort and the desolation, you waited for us to say goodbye because you knew we needed it. And 48 hours after we saw you for the last time, you died.

I wish I had Mark’s conviction.  He will probably convince me eventually.  I have always found him to be very persuasive.  (How else was it that, without exception, as children he always got to be Batman and I was always Robin? )  The last words you said to us were, “That’s your grandfather,” when Mark showed you a photograph of Kung Kung.

I wish that you had been able to speak to me. I wish that you had given me some sign that you knew me.  You recognized Mark instantly, both in person and when I mentioned his name.  Mark feels sure that you knew me.  I want to believe him.  You were very interested in all of the photos I showed you of your granddaughters whom you never met.  Maybe Mark is right because I don’t think you would have been so interested in those photos unless you understood who they were.  I really hope so.

It’s autumn now and the leaves are turning.  It’s such a nostalgic time of year, so suited to melancholy.  Today was your birthday.  You would have been 77. 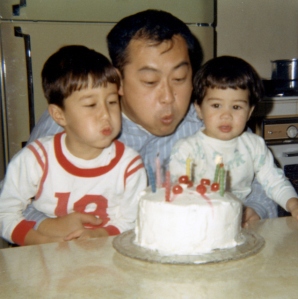 I remember so many things so clearly.  It’s probably because you were not around to make that many memories, and  I have to get as much mileage as I can out of the ones I have.  You used to sing to me, “I Can’t Help Falling in Love With You.”  And you told me I was beautiful, but you told me I was smart and that was more important.

The last thing I said to you was, “I love you, Daddy.”  I am glad for that.  And I am glad that I saw you, even if it was so short.  I wish things had not been so complicated.  You are part of me.  I’m sorry I stayed away so long.  I don’t know what your religious beliefs were at the end.  I have to think that you still believed strongly in what you learned from Godmother. I still have her book that you gave to me.  So maybe you can hear me now.  If so, you should know that I am sorry and I love you and thank you, Daddy.  October 19, 1935 ~ October 2, 2012.