As an attorney who practices family law, people frequently ask me if I can predict which relationships will succeed and which will fail.  The answer, of course, is no.  Relationships fail when one party reaches the limit to what he or she can personally tolerate.  Once the balance tips in the direction of failure, only heroic efforts will reverse gravity’s pull.

The way couples behave when they are happy is almost irrelevant.  It’s easy to be nice when things are going smoothly and before you’ve licked the new off of someone.  Much more can be gleaned by the way people fight.  The couple that, while angry, continues in the direction of problem solving, is likely to last longer than the couple that takes off the gloves and says every angry word that comes to mind in the midst of conflict.  “I am really angry at you,”  is significantly different from, “You’re an asshole,” although contextually, they probably mean the same thing.

Relationships seldom crash on the rocks of one major event.  It is almost never an act of in flagrante delicto.  What kills relationships is death by a thousand cuts, the slow erosion of shoreline over time by the lapping waves of small conflict.  It’s the compromises that you make that turn you into someone you cannot recognize, the thousands of inconsiderations forgiven, the recidivist failure to prioritize your priorities.   They happen in such small increments that you don’t realize you are bargaining away not only your happiness, but your identity.  At that point either the idea of change is too traumatic or frightening or the relationship finds its conclusion. 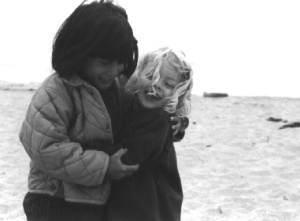 The other side of the coin is also true, the thousands of tiny miracles that knit together and fill life with meaning.  You seldom know in the middle of it when you are creating a memory that will last a lifetime.  When Ariel was a baby, I remember exquisitely the first time I realized while I was holding her that she was holding me back.   It’s the way your father brought you water every evening when you were a child (and a teenager – and maybe even a young adult).   It’s the way your mother read you The Black Stallion books in the bathroom every night as a child because you were afraid that sharks would come up the drain of the bath tub.  It’s the way someone pronounces pecan the southern way that will make you hear it in that voice and pull you back to the same table at the same restaurant for the rest of your life every time you see the word or bake a pie.  It’s the comforting weight of your favorite dog’s head in your lap when you are stressed, the familiar, sassy buck from your favorite horse.

Like the thousand cuts, it is usually not the big events that stick with you forever.  It’s a thousand tiny moments in time that your memory captures for life, but only if you pay attention to them.  You never know when you don’t take a call from a close friend because you are too caught up in the details of your own life that that friend will die of a drug overdose before you find the time to call her back.  You never know when you are in the last conversation you will have with someone who makes a difference in your life.

Time marches on with a quickening pace and once it’s gone, you can never get it back.  Those thousand tiny miracles are really more than a thousand or thousands.  They are infinite, but you have a finite amount of space in which to fit them.  The key to happiness is making room for as many of them as you can.

6 thoughts on “A Thousand Tiny Reasons”