“Women should be obscene and not heard.”

We have just concluded the major western holidays, and when I say “major,” I mean the big cooking and eating holidays.  I am a Foodie.  I spend days cooking (and, of course, eating)  in the last six weeks of the year.  (I am up by four pounds at the moment, so I plan to curtail my epicurean urges and to stimulate my treadmill urges in the next six weeks.)

This brings me to a very important point:  the oppression of women.  Yes, I’ve said it.  Even in these level playing field, equal opportunity, bring home the bacon and fry it up in a pan days, women are discriminated against, heartily oppressed by those endowed with a Y chromosome.

The issue is the KitchenAid stand mixer.  I know no serious cooks, or even not-so-serious cooks who fancy themselves serious, who do not have this iconic American appliance in their kitchens.  Mine is blue and I’ve had it for some 20 years.  It is very similar to this character on the left.  I know it looks innocuous enough, but beware!  That is a symbol of the history of the oppression of women.  I am not exaggerating.

Stand mixers are owned and used predominantly, although not exclusively, by women.  It is marketed to women and it is designed to appeal to women.  It was designed in the 1930s by Egmont Arens and has remained largely unchanged since it was patented.  (Remember that last point, if you would, because I am going to circle back to it eventually.)

The problem with the KitchenAid mixer is that it would be more aptly named the Flour Volcano.  The Whipped Cream Spritzer.  The Kitchen Filthifier.  Yes, it spews ingredients with violent force.  It is the Linda Blair of home appliances.

Those of you without extensive experience with this belligerent appliance are saying, “She needs to buy the splash guard made for this very purpose!”  How very astute of you. And how obtuse. I have the splash guard.  The splash guard is the second most spectacularly unsuccessful innovation in stand mixers.  The splash guard does not quell Linda Blair’s proclivities, it just changes the trajectory of the expelled flour so that it shoots downward and onto the floor instead of upwards.

How is it that we can put a man on the moon, we’ve put a mainframe computer onto the desktop, we’ve eliminated the tube in television 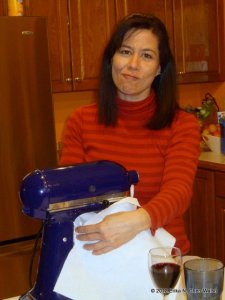 sets, and yet, in 80+ years, we have not changed this stand mixer so that it does not send projectile ingredients onto kitchen ceilings across this great country?

On Christmas Day, as I sat supervising whipping cream in my KitchenAid bowl (with my safety goggles on), my best friend said to me, “You’ve got whipped cream in your hair.”

The answer is not difficult.  The KitchenAid needs a deeper bowl and a longer mixing arm.  It’s really just that simple.  A snap on splash guard with a chute would also be an improvement, as well as an instrument that would self-scrape the bowl (but now I am being a perfectionist). I am not an engineer, just stating the obvious here.

The forgiving among you are sanctimoniously thinking that I am overreacting, that although the design of the KitchenAid may be archaic and unchanged and bad, that it is just a single appliance and not necessarily a reflection on the way society views women.  To this I say Humbug!  And if you doubt me, I suggest you give thought to two other relatively unevolved instruments (both invented by men) that have also remained virtually unchanged:  the speculum (invented by J. Marion Sims, the father of American gynecology who used his slaves as experimental subjects), and pantyhose (invented by Ernest G. Rice and patented in 1956).

I rest my case.

2 thoughts on “KitchenAid Mixers and Feminism”